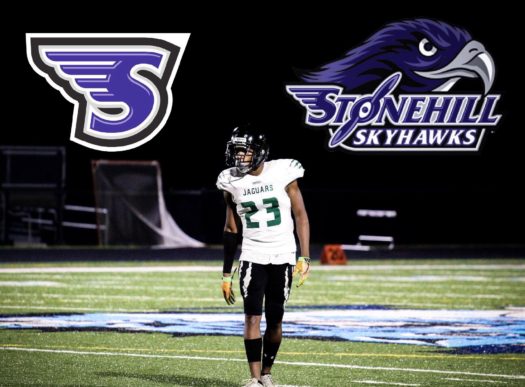 Darryn Hylton, a senior defensive back has announced where he will be playing his college football. Darryn will be continuing his career as a student-athlete at Stonehill College! Darryn has an outstanding story. He is a former basketball player, who in his first year playing football, accomplished so much. Darryn worked his way into the rotation and then into the starting lineup. Darryn was able to do this by working hard every single day in the weight room and on the practice field. Darryn also is a hard worker in the classroom. Maintaining a 3.4 gpa, Darryn set himself up for tremendous success on and off the field. Darryn was able to acquire many offers to play college football, but ultimately Stonehill was his choice! I asked Darryn a few questions about his commitment:

Terrence: “Why was Stonehill the right school for you?”

Darryn: “I felt like Stonehill invested in me. They came to flowers specially for me a. As soon as i stepped foot on campus I fell in love with the environment and facilities. I felt like I could excel with the coaching staff and team. I will be in my own environment.. it’s a different are but there’s nothing wrong with change.”

Terrence: “Now that you and fellow DB and Saint Anslem commit Sulton Woolbright will be cross town rivals, is there any trash talk?”

Darryn: “Yes there’s tones of trash talking . We’ve already started. That’s my brother but when we meet on that field he’s my enemy. We beat them this past year, I plan to continue the streak for the next four years. It’s always good to be able to compete with an old teammate.”

Terrence: “What are your immediate goals for freshman year?”

Darryn: “My immediate goal is to be impactful. I want to earn as many reps as possible. As a freshman I want to be defensive rookie of the year in the NE-10 conference. I want to help on special teams as well.  I’m working all offseason so I can make an immediate impact when I step on campus.”

Darryn will make things official when he signs the dotted lines on National Signing Day on February 6th! Go Jags!