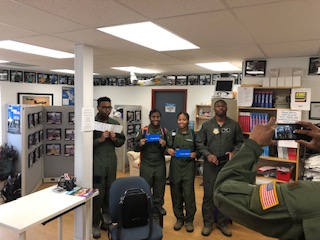 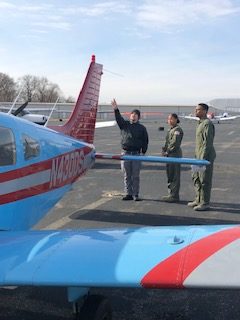 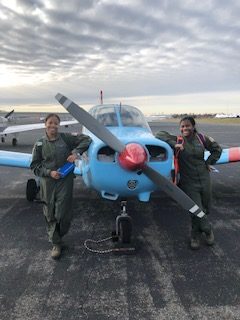 On January 26th, 2019, your very own AFJROTC Cadets went on an instructional  flight with the Delaware State University Pilot Instructors at Bay Bridge Airport. The cadets that were allowed to go on the instructional flight was the cadets in the Aviation Honors Ground School, also called AS-500. The cadets in the class are Cadet Major Nnamdi Olebara, Cadet Major Kobe Parham, Cadet TSSgt Tamia Thompson, Cadet SSgt Raven Felder, Cadet SSgt Morgan Miles, and Cadet SrA Marvin Makle. Only four out of six cadets went on the flight. These cadets work hard in every class to make sure they knew all the important information needed to know how to fly an airplane. They also use simulators to help practice the pre-flight inspection and other checklist needed during and after flights. We also worked on coordinated turns, descending, climbing, using the rudders, takeoff, landing, and traffic turns,. Major Stovall, our SASI prepared us for this flight with Delaware State, so we would have a lot of information to rely on when they ask us questions or even let us take control of the airplane.

Cadet SSgt Raven Felder, a senior AS-500 cadet, said, her experience flying an airplane was fun and exciting. When she first got to the airport, she was a little hesitant towards flying the airplane. After doing the pre-flight inspection, she started to become more relaxed once the instructors were telling us what will happen that day. The aircraft that she flew was called the PA-28. The instructor had most of the control of the airplane, when she wanted to take control of the airplane, she would have to say “I have the airplane”. She would be given commands to practice, such as coordinated turns, climbing, and saying the checklist to the instructor. When the student go to the airport , the Delaware State Instructors went over  the agenda of what we were going to do today and introduced themselves. As the cadets headed outside to the airplanes, they did the usually inspection to make sure the aircraft was ready for takeoff. The instructor took off on the runway. When we got to about 2,000 ft, the instructor let Cadet SrA Makle take control.  Cadet Felder was in the back riding along, observing the controls and the movements of the airplane. Then we landed at Easton airport and started to talk to the other cadets ( Miles and Olebara ). The cadets and instructors talked about their experience so far. Then, it was Cadet SSgt Felder’s turn to take control of the airplane. So, after the instructor took off, once he got to 2,000 feet, he let her take control of the aircraft. She was very scared but with she learned in the classroom and simulators, she understood what she had to be done. She said, that flying the airplane was very different from the simulators but very easy. The instructor landed and and signed their log books to document her training. It  was one of the best experiences she’s ever had. Her favorite part of the entire day was when we landed at Easton airport and was talking to Cadet Olebara and Miles about  how fun flying is, this wad a moment where they bonded and learned many things about each other. If there will be another flight, she will definitely take the opportunity to go because this is once in a lifetime and a fun learning experience.

The cadets enjoyed their time at the Bay Bridge Airport with Delaware State and hopefully this experience has changed their point of view about flying airplanes. Good luck to these cadets as they continue Aviation Honors Ground School!