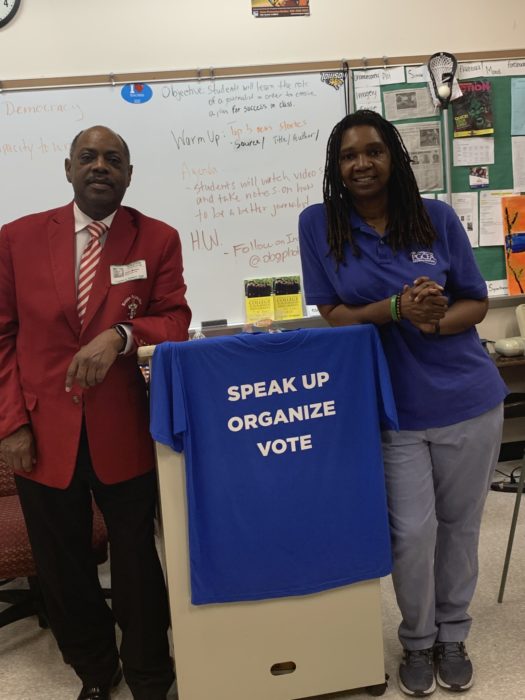 Mr.Moore states,“ Voting is very very critical, next year will be the election of our next president and minorities need to have a voice.” Throughout his speech, Mr.Moore spoke about the importance of minority youth and their understanding of our political system, the election process, and what voting has done for the Black community in the past, as well as what it will possibly do for the community in the future.

HOW DOES VOTING AFFECT US.

Mr.Moore tells Flowers students that “…there are issues being put to force this day in time such as blocking folks right to vote, such as moving polling stations in certain parts of Maryland so that African-Americans and Latinos from urban areas can not vote it’s a real serious issue that’s why y’all gotta learn.” In a world where the issues of people of color are put at the bottom of the totem pole, one is lead to believe that a merical is what is going to save us. But really voting is what we need, not enough of us know that in order to win against the system we have to play the game. Doing things like tackling gerrymandering, voting for local officers that will advocate for your community, and reviewing your state governor is the only way to play against the system while still having a voice.

AS YOUNG PEOPLE WHAT CAN WE DO?

When asked who’s job is it to teach us about voting Mr.Moore states, “It’s the parents, the school, and the rest of society’s job to teach kids about the importance of voting, it’s best to start out young with this knowledge.” Thanks to Mr.Moore we had a full class register to vote and ready for their next election waiting to make a change. I say Flowers if your the age of 16 or older go out right now and get a registration form like the one shown in this article. We as the future must be equipped with the right tools to further our excellence as a community, the resources, though few, are out there and we have to “seize our opportunity” as Mr.Moore said.

After Mr. John Moore finished his step by step detailed explanation of how to fill out the given voting form I stayed after and asked the class a few questions about the guest speaker and the information given.

“Collectively what do you know now about voting and it’s importance compared to before Mr.Moore walked in?”

“Imma just say that I feel like adults made voting seem so difficult when it’s really easy.”

“Mr.Moore really like explained that every vote counts and that I should be worried about politics if I wanna have a flourishing community.”

“Now that you’re registered voters what are you going to do next?”

“I feel like I need to start researching politics and start looking for who Imma vote for.”

“I’m most definitely showing it off.”

Overall Mr. John Moore really provided a gift to these Flowers students and together we want to thank Mr. Moore for giving up his time and teaching us. The future is in our hands now and the question lays whether we are going to stand up and take the responsibility or crumble under the pressure of society and system.