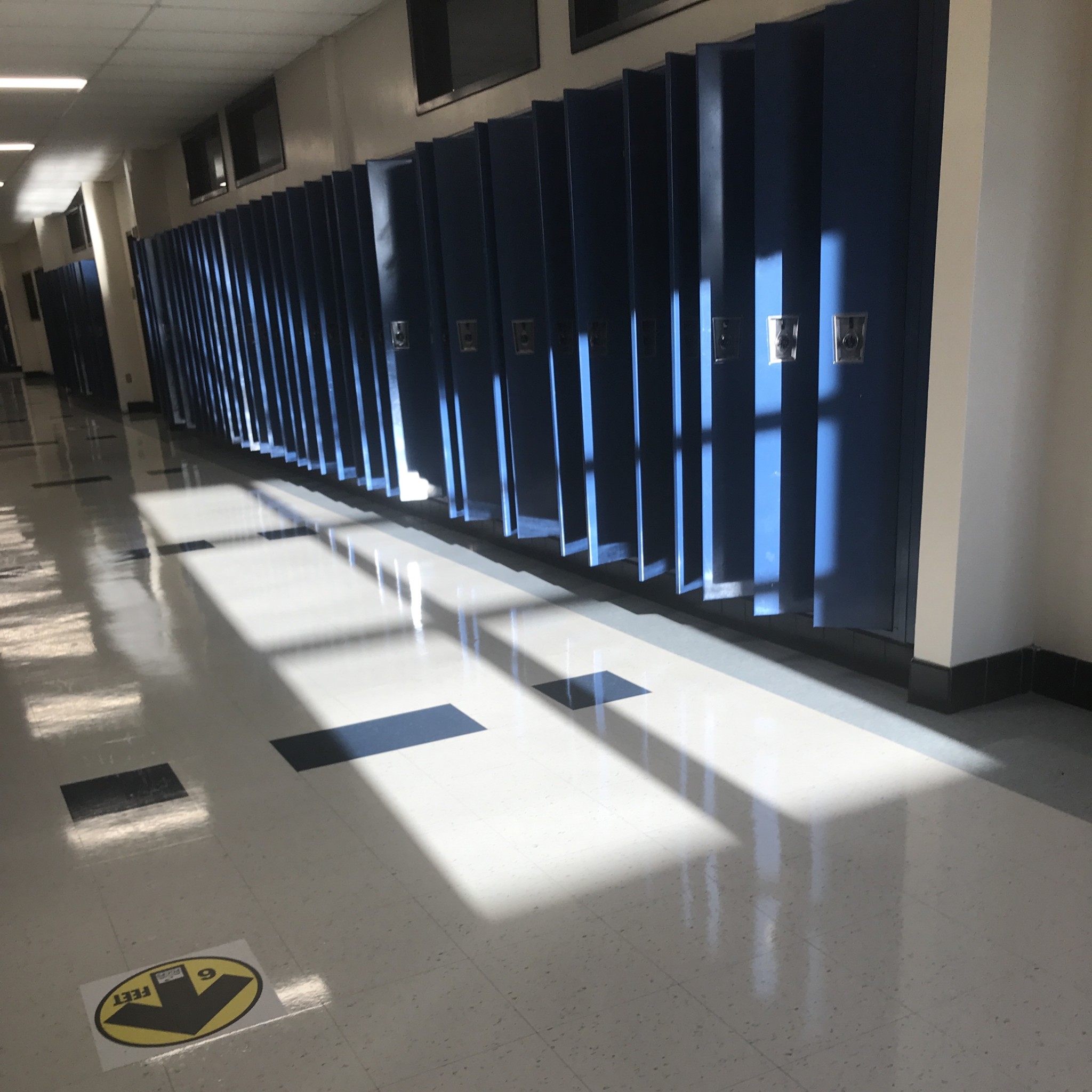 ▲
Lockers are open like last days of school and stickers placed, adding to the "strangeness"
Kayla Hartman

▲
Lockers are open like last days of school and stickers placed, adding to the "strangeness"
Kayla Hartman

On November 7, 2020, I and dozens of other high schoolers gathered at the doors of Charles Herbert Flowers High School to take the SAT. And by gathered I mean socially distanced, of course, each of us standing six feet apart in a line, awaiting confirmation of our identity and a pump of hand sanitizer.

We were given a sticker with our name on it, and a room number below it. I was second in line, and I made my way up to room 309 on the third floor. From within the building, I could see the line of students, mostly unfamiliar, stretching to the bus lot. Stickers placed 6 feet apart were stuck onto the empty hallway floors. I stood at the door and waited for my proctor to appear and gradually fellow students hovered around as well.

This was the most nerve wracking part for me. Ten or so other students spread out in the hallway, and their collective worry seemed to grow. I read them as friendly, but they were slightly uneasy around each other. My interpretation is probably affected, of course, by the masked faces and my own nervousness.

I got very lucky in that I ended up with only one other student in my testing room. We sat on opposite sides, far from the proctor as he relayed testing instructions. I had seen other rooms with a handful of students, so I was especially grateful for this setup. Being around fewer kids lessened my nervousness for the test. There was less time wasted trying to get people to follow instructions and there weren’t so many distracting sounds or any moments when the proctor had to repeat things. Being sat back in that school desk and chair felt very familiar and motivating. The sound of the school even seemed exactly the same as it had been, and sometimes I was able to pretend I was just sitting in class to finish an assignment right before lunch.

Despite this round of the SAT technically being higher stakes than when I first took it in March 2020, I definitely felt more relaxed. (Whether that was a good or bad thing will be determined when scores are released.) In March, there had been at least twenty other students in the classroom with me; then there was one.

I had fully expected this test to be canceled like my other three were since May, so you can imagine my surprise when it was not. However, I am extremely appreciative that I was able to take it, since many so many seniors have not been so lucky. The test-optional status of most universities during this application cycle has eased the minds of some applicants but not all, and it is understandable to be on edge about not having a “satisfactory” score- or no score at all. However, that is not (and was not) the most important factor in the admissions process. You still have a chance to impress admission officers (AOs) with your grades, essays, and extracurriculars. Essays maybe even more important this year. Not only are they a way for you to appear as a person full of depth instead of numbers on a page, but AOs use them to evaluate your writing capabilities. Writing a solid essay can help show them that even without that SAT score, your command of language is in fact up to par.

Most seniors may have reached their endpoint with the SAT at this time of the year, but those in lower years, especially juniors, should still think about the importance of the SAT in their future plans. If you know you’ll need it for scholarships, college, or both, set your goals early and realistically. Look at where you are and where you need to be in terms of scores and make a plan. Speak with upperclassmen, parents, teachers, and school staff for advice on your specific course of action. But never forget that this is not something to stress over excessively. No one looks back on their entire life and their biggest regret is not getting 50 points higher on the SAT; this is only one thing out of a million others. It sounds so cliché but it’s true; try your hardest, and you’ll be okay.

Best of luck to those taking the SAT or any other standardized tests this year!