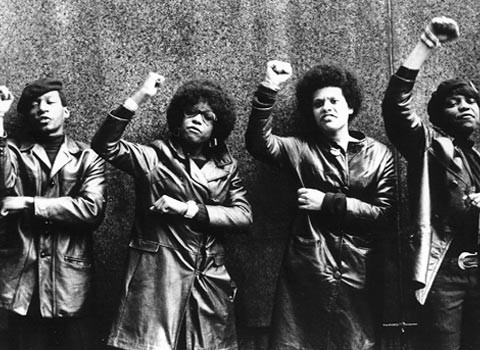 The Black Panther Party
On October 1996, Huey Newton and Bobby Seale founded the organization The Black Panther Party(BPP). The Black Panthers practiced self-defense of minorities against the US government and fought to establish revolutionary socialism. They monitored police behavior so they could challenge their actions against brutality. They also offered social programs for the community like free breakfast for children and health clinics.
Huey Newton and Bobby Seale founded the BPP in Oakland, California. The Original six members of the Black Panthers included Elbert “Big Man” Howard, Sherman Forte, Reggie Forte, Little Bobby Hutton,  Huey Newton, and Bobby Seale. There were Black Panther chapters in the United States from 1966 until 1982, with international chapters operating in the United Kingdom in the early 1970s, and in Algeria from 1969 until 1972.
They idealized in black nationalism, maoism , anti-fascism, anti-imperialism, Marxism-Leninism, revolutionary socialism , and anti-racism. The Black Panther Party has a controversial history. The Black Panther Party will always be remembered as one of the most influential black movement organizations, and “the strongest link between the domestic Black Liberation Struggle and global opponents of American imperialism”.