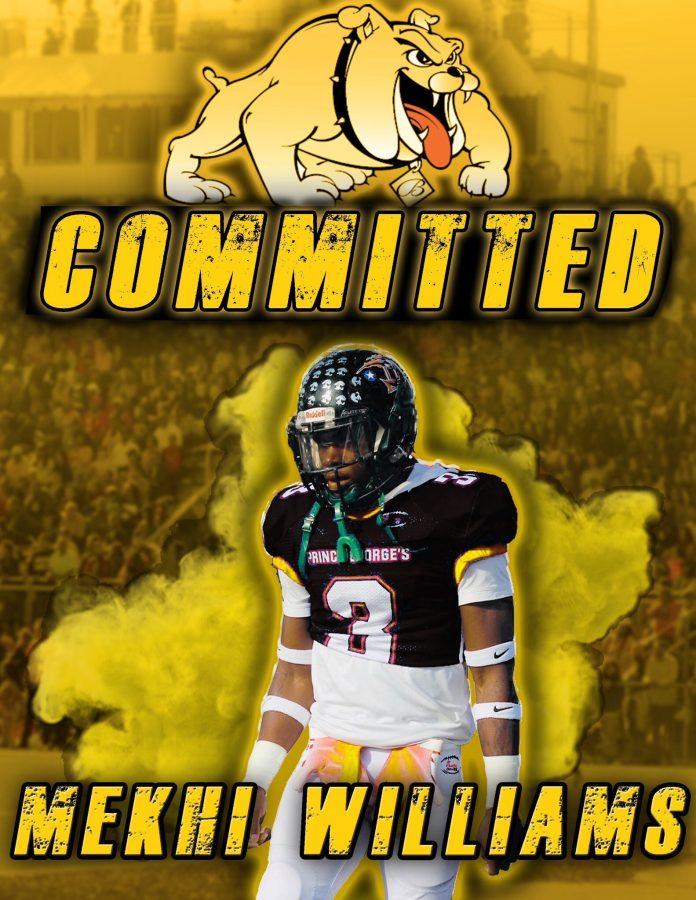 Senior defensive back, Mekhi Williams, has announced his commitment to Bowie State University! Mekhi has accomplished so much during his tenure with Flowers Football. He has been a Team Captain and Starter on Varsity since the 10th grade. In that 10th grade season Mekhi was named an All-County Running back and led Flowers football to their first playoff berth in years. He continued his dominance the next season when he lead Flowers to an undefeated regular season. Mekhi was honored with another All-County selection but this time it was for his stellar play at the Safety position. In his senior season Mekhi was able to overcome a significant shoulder injury and lead Flowers to another undefeated season and the teams first playoff win in Coach Powell’s tenure. Also in his senior season Mekhi was named once again to the All-County team as a Safety. He was also named to the Washington Post’s All-Met team(HM), and to the PG County Elite 22, as the best senior in the county at their respective positions. Mekhi has made his name as one of the best players in the state and now he has his eyes set on the CIAA! I was able to ask Mekhi a few questions about this amazing accomplishment and commitment:
Terrence: “What made Bowie State stand out for you amongst the other schools?”
Mekhi: “I felt at home at Bowie. They had my major which was most important, Social Work. I have a good relationship with pretty much all their Coaches and some of their players. My financial package was right and it was closer to my Grandmother and Mother.”
Terrence: “What would your advice be for any of the incoming freshman?”
Mekhi: “My advice to an incoming freshman would be to stay on top of your grades early. I know everyone says it but its the truth and you wont be sorry later. And control and worry about the things only you can control. Everything else will fall into place.”
Terrence: “Lastly, what are your goals for your freshman season at Bowie State?”
Mekhi: “My goals for my Freshman year is making All-Conference Safety, winning a Conference and National title. Also maintaining a 3.0 GPA in the classroom.”
Congratulations and Good luck to Mekhi Williams as he looks to continue making strides on his path to success! Go Jags!