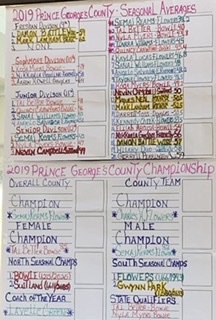 The Charles Herbert Flowers golf team season has come to an end and overall it can be confirmed that it was an excellent season for the players. On Tuesday October 15, 2019 the team competed in the County Tournament at Enterprise Golf Course where the team won the county championship due to the overall scores during the entire season.
Varsity team captain, Kayla Lucas, had a few words to say about the win,
“The county champion is one of our players this year, Semaj Reams. He’s a senior, and played extremely well this season with an average of 38.2 out of at least five tournaments… that’s very hard to do in golf terms”.
Lucas also spoke up on the downfalls within the tournament and the winning relief the team finally had, “We won the majority of the tournaments individually, but lost a couple to Bowie.Despite that however, because we won the majority and our combined averages were the lowest, we were declared the county champions this year, division and overall”.
Congratulations are certainly in order for the team for a wonderful win and season!