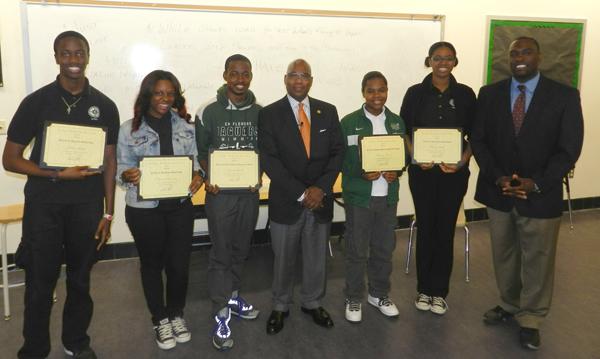 “Lead the world and be the innovators of the future.” This was the wisdom that Dr. David Wilson imparted on five of Flowers’ brightest students in the senior class. Dr. Wilson granted each of the students scholarships to the Honors Program at Morgan State University, of which Wilson is the president. Four of the students were in the Science and Technology program at CHFHS.

Dr. Wilson began the ceremony by talking about all of the opportunities available to students at Morgan. He talked about the school’s recent efforts to diversify the campus, noting that there would be students from as far away as Brazil and China attending the university in the fall. He said that Morgan State even has a partnership with a college in Shanghai, China, and encouraged students to study abroad.

Wilson then began to present the scholarships, and the focus shifted to the accomplishments and credentials of the students. Brianna Grosvenor (plans to major in Political Science) and Christa Fields (Computer Mathematics/Natural Science) were both given the Frederick Douglass scholarship, which covers full tuition to the university. Briana Brown (Business Mgmt.-Accounting) and Derrick Harold (Computer Science) were awarded with the Harriet Tubman scholarship, which places students in the Honors Program, gives them $2,500 a month for tuition, and also makes them eligible to receive the Frederick Douglass scholarship their sophomore year.

Dr. Wilson commended the students on their choices of fields to study, saying that most of these majors were not only in high demand for the job market, but also that very few African-American students pursue them. He encouraged the students to become students at Morgan, referring to the university as a “paragon of excellence..

Finally, Dr. Wilson gave away the most prestigious scholarship that the Honors Program offers: the Martin D. Jenkins scholarship. He gave this award to Science and Tech student Joshua Samba (Engineering Physics). The scholarship covers full tuition, room and board, and also grants the student a $500 stipend each semester.

Mr. Brown and other administrators attended the ceremony. Mr. Brown, along with the students, thanked Dr. Wilson for his extensive generosity in passing out these scholarships. “We look forward to a great partnership with Morgan”, the principal said. “We also look forward to pushing more talented students from the Mecca of Excellence towards Morgan in the future”.