The Place Beyond the Pines Review 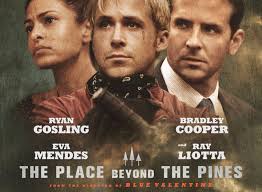 You usually don’t get too many great movies during this time of the year. Most studios throw out their worst projects right before the summer blockbuster season starts. The Place Beyond The Pines is a refreshing change of pace from that trend. It’s a great movie that anyone who calls themselves a fan of cinema ought to see.

To get deep into the plot would spoil the film, so I’ll be brief and discuss what can be seen in the trailers. Gosling plays Luke Glanton, better known as “Handsome Luke”, a tattooed stuntman who starts robbing banks to support the son he recently found out he fathered with Romina (Eva Mendes) in Schenectady, New York. Cooper plays Avery Cross, a rookie cop with a disintegrating marriage and a young son of his own. While this, as I said before, is what you get in the trailer, there’s a lot more here than what meets the eye, and you never really know how things will end until the credits roll.

That suspense and surprise is something I’ve personally missed in movies recently. Many films these days are incredibly predictable, the only shock value coming from copious amounts of gore in the horror genre. This is the first movie I’ve seen in quite some time where I literally had absolutely no idea what would happen next.

Visually, the film is as good as its’ actors are. Landscape shots of both rural and (relatively) urban areas are breathtaking, and everything you see feels organic. There is a handicam used during the scenes that involve motorcycles, and to see the ride from the perspective 0f the person on the bike is both original and exhilarating. In addition to the excellent cinematography, the film is well written. Many of the dialogues flow naturally and sound like actual conversations, and you can feel the raw emotion in much of what is spoken-and unspoken.

The only true flaw I can find with the film is Mendes’ performance. She doesn’t really do much for or against the plot, and I often found her character to be annoying. That could be due to her character needing to be annoying, but even noting that as a flaw is nitpicking, anyway.

The bottom line is that this is a great, great film. As a matter of fact, I’d be willing to go out on a limb and say it is the best film I’ve seen all year. I give The Place Beyond The Pines a 9/10. Go see it for full price in the theatre, as soon as you possibly can. It’s an experience that simply can’t be missed.