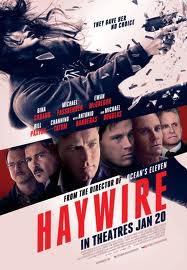 Many, many movies are available on Netflix. You could literally spend all day browsing the instant streaming options without watching a single movie. This makes finding a good, unique movie even more of a treasure than usual. Haywire is one of those movies.

While the film has a small ensemble cast (Channing Tatum, Antonio Banderas, Michael Douglas, Bill Paxton, Michael Fassbender), the lead is relative unknown Gina Carano. Carano is a female mixed martial artist, and this is her first time trying her hand at acting. She doesn’t stray too far away from her day job here, as punches and kicks fly for about ¾ of the movie.

Carano plays Mallory Kane, an employee of a spy contractor for the government. She’s set up by her former employer Kenneth (Ewan McGregor) and framed as an international terrorist and enemy to the state.

Since Carano quite literally fights for a living, it should go without saying that the action scenes are the best part of the movie. Phony-looking action is a trope that plagues action films starring women. Movies like Columbiana and Underworld have women fighting men and overpowering them with force, as if they stand a foot taller and weigh 50 more pounds. Haywire takes a more realistic (and original) approach.

While Mallory is forceful, she is also skilled, and relies more on technique than strength to subdue her opponents, something that a woman fighting a man much larger than her would actually do. While the action itself is a sight to behold, perhaps the best thing about the fight scenes themselves is that no music accompanies them. It’s almost as if you’re there with the characters yourself, feeling the true impact of every blow.

The acting in the movie is a bit better than standard action movie fare, though most of the characters make brief appearances. It’s a short movie, and you’ll probably be surprised when it ends.

All in all, it’s more entertaining than a lot of action movies, and better than a lot of movies you can watch on Netflix. It’s a nice way to kill 90 minutes.