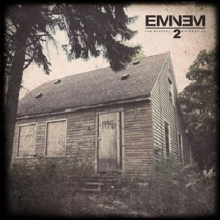 The Marshall Mathers LP 2 is Eminem’s eighth studio album released on November 5. The title of the album was revealed at the 2013 MTV VMA’s and his lead single of the album, “Bezerk”, was released two days later. This single was able to peak at number three on the Billboard Hot 100 chart. Other top singles off the album include Survival which was released October 8, and Rap God which was released on October 15. The fourth single, The Monster, which features Rihanna, was released on October 29.
Eminem revealed during a Hot 97 interview in May that he had begun working on his next album. On September 5, it was announced that “Bezerk” would be the featured song for the 2013 season in ESPN Saturday Night Football from September 14 to December 7. A small portion of the music video for the song was also released during halftime and soon it became a viral online video. The artwork of the album was released on September 20 via Eminem’s Twitter account.