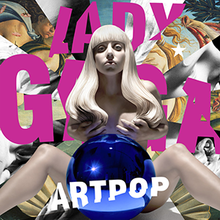 Art Pop is Gaga’s third studio album released worldwide on November 11. It was originally expected to be released in early 2013, but was postponed due to her developing synovitis and also getting a labral tear to her hip resulting in a surgical correction. This also caused Gaga to cancel the remainder of her Born This Way Ball. In August 2012, Gaga got a matching tattoo and announced on Facebook and Twitter that the record would be titled ARTPOP, and preferred capitalization for stylization. Gaga described Artpop as “a celebration and a poetic musical journey” that displayed a “lack of maturity and responsibility”.