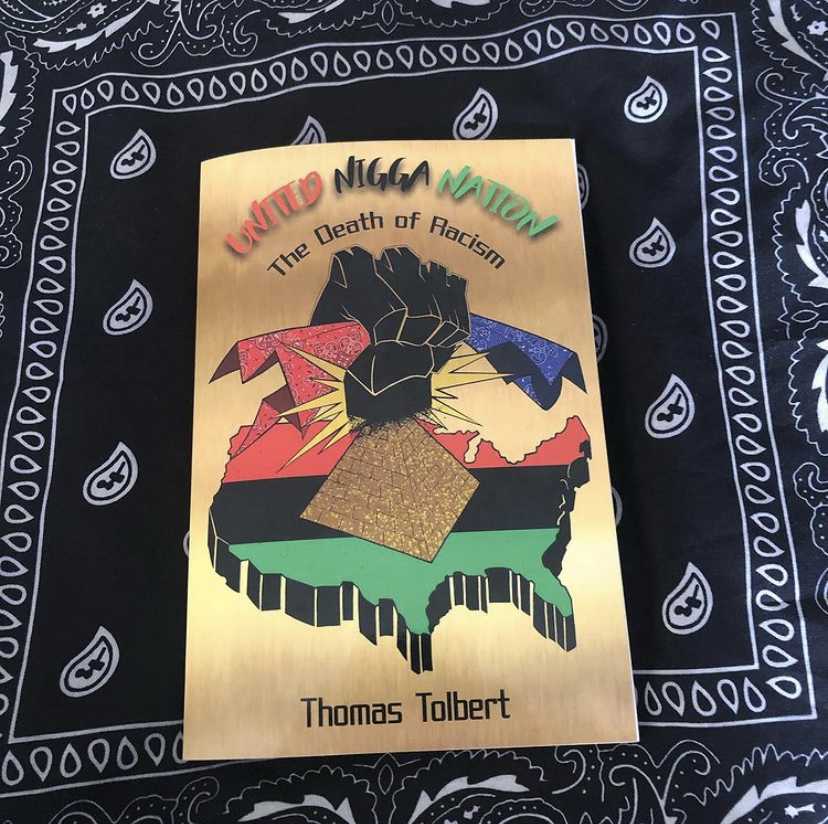 On Wednesday, November 18, students from the club Jaguar Voices had the chance to speak and interview, writer and author Thomas Tolbert about his newly published book “Untied [ __ ] Nation: The Death of Racism”. Thomas was also eager to talk about the book as he says is like “a verbal playground”. He was open to any questions and did not stray from giving his answers. He addresses several matters like what it means to be a [ __ ]. With this being the first time members in the club interviewed someone, it turned out to be fun and a success, with it only being than an hour long.
Thomas was grated to the interview by the host, Virginia Bates, and explain that Jaguar Voices was excited to get to know more about him and his book. The first question was asked by Virginia Bates.
Virginia Bates: How did you become a writer?
Thomas Tolbert: Just like with anything else it started in my mind. To say hey I can be a writer because at the end of the day like school molds us to write anyway because you have to turn in so many papers. Luckily for me once I got to school it was second nature because like I said before my mother’s a teacher, so writing was something that i was fundamental for me in my household. To where when it came to school it wasn’t forced upon me like a lot of people perceive it as like something they don’t want to do because they first pick it up in school. So it was more like just more of a way of conveying yourself in my house. So getting grown and doing other careers to where it was a lot of work you know. I mean really doing physical labor or doing sales the way i did it and stuff like that. To where i could rely on something that’s fundamental for me as writing to be a more of a a diving board into a field i was more interested in. It was kind of started in my mind that i was a writer and then just pursuing my thoughts actually solidified me as a writer.
After the first question, other members of the club got more comfortable and was ready to ask their questions. The next question was asked by Junior, Daphne Nwobike.
Daphne Nwobike: Were you ever scared that people wouldn’t take you seriously when you wanted to write your book?
Thomas Tolbert: Of course those thoughts definitely come into mind and that’s why I had to do so many drafts, so many revisions before I came out with it because I wanted to be solid in my stance and I wanted to be profound in my  conveying the message. So once I felt that I was at that level I went further with it, but yes of course I felt that it was going to be a uphill battle just with people accepting the fact of the title let alone let alone the the the neediness of what’s inside the book. But fear is just motivation for me I easily try to transfer fear into motivation because fear can either hinder you or you can transfer it into motivation and it can propel you.

Favour Ijaola: Okay hi my main question is well, I looked at your title and I’ll tell you now it really caught attention. I just would like to know what made you like pick that title and what is the meaning of that title? What does it mean to you?
Thomas Tolbert: The title means to me- we’re in the usa right? So one thing I’m aware of now fully is that the usa is- has, a few different nations residing within itself and one of them happens to be black america and it doesn’t acknowledge itself as a nation within a nation. So I decided to come up with my spin on the usa and call it the U.N.N. which is United [ __ ] Nation. So because I feel like we are america junior. So in order to implement that I had to identify it. So within identifying it I wanted to make something within three letters that have the weight of USA or NWA or the FBi or the CIA. You know what im saying just something with three letters that is impactful and so the most impactful thing I was able to come up with which is a United [ __ ] Nation, which is something that has been on my heart for years now, because I was questioned years ago about my- she’s now my wife but she was my girlfriend back then. We were you know learning each other a little bit better and we were trying to see what we wanted out of life, and through the questions she was asking me, the answers I was giving us I wanted to see unity amongst my people and she asked me who was my people and I said [ __ ], and she said what if you have unity with [ __ ] what would that be, and I was like [ __ ] I was like we would have our own nation you know, and it was all just theoretical then but as we said- as I said United [ __ ] Nation it had like a nice ring to it, and I said it a couple more times and like a chill came over the room to where we were both like, I think we got something here, but that was 10 years ago so it took me almost eight to nine years to mow that in actually into the idea for my book. So like they say rome wasn’t built overnight.

Kayla Hartman: I would like to ask, who are the biggest influences on you when you were writing the book?
Thomas Tolbert: The biggest influences on me when I was writing a book would have to be- it’s a brother by the name of Dr. Claude Anderson, who was a profound writer He’s written several books on the same topic that I’m talking about. Just a few of them, one of them is power nomics. Another one is black labor white wealth. Those are the main two that I was taking information from and citing it and everything in the book. Also my mentor, a brother back out of Louisville, Kentucky named Dr. Norris Shelton. He is also a writer along the same topics that I write on. He has a couple well he’s written, 18 books now but the main book that I suggest one read is “America’s little black book” it’s a very influential, eye-opening veil removing book. So those two people come to mind and as an inspiration as a writer when I was younger a brother by the name of Donald Goins was a very influential in my life because he show me you can actually use the pen to write a picture. You know you don’t have to draw a picture you can actually write a picture to it when you read it, you can see it, and that just changed my life right there to know that was possible. So I try to do the same thing with segments when I write. So those are just three if you want anymore I can continue.
Virginia Bates: Yeah, please.
Thomas Tolbert: Okay well, another gentleman that has inspired me is Green-  uh Green, I forget his first name but he writes the like The 48 laws of power, The laws of human nature. Trying to think of his- I think it’s Adam Green is his full name I know his last name is Green. He writes some very intriguing books uh to where I like the way he does his formats, because he’s able to teach in a story form. Like he would give the- for instance one of the laws of human nature is vanity. Not vanity but to be somewhat evanescent you know. To be here one moment and then be gone. To have people to create that wonder that the mystery value of yourself. So he goes on to go into a whole backstory of lady coco chanel, the famous wardrobe designer, and it puts her into more of a human form to where you know her whole story and it makes you respect her even more. To know her struggle of coming up from just being somewhat of a street walker to a more respected prostitute, up to the chanel that we all know as the lady who has the fancy fragrances and stylish clothes. So, but she did so with creating a mystery to her, because if everybody knew who she really was they probably really wouldn’t mess with her so she knew that and used that advantage of creating this mystery. So with him giving that story, you understand that law even more, and he does it with all of his books. So it’s more of a- he shows you how to hammer the nail in through stories a lot like they do in the bible. That’s another thing I mean it has endless information and insight of course in the bible, in the Quran and books like that. So where they talking somewhat of parables to where you can convey the message to your everyday life even though we live in totally different times. The meanings still hold the same value. So those are two more. I think I got one more I think another great author is Eckhart Thule. Eckhart Tulli was a- he wrote The power of now, and several other books but one of the most, The power of now is one of my most eye-opening books that summarizes the power of now because we never have the future and we never have the past all we ever have is now, and if you have ever been around me, you’ll know I don’t wear a watch because it’s always right now o’clock. [Laughter] So that’s that so yeah that’s just a few but reading is a- I look at books like channels you know what I mean. A certain author is like a certain channel and the more you read of their literature the more you know you like their channel and then of course you can find another author that’s a good way to turn the channel because they call it a TV, the idiot box it’s really not known for teaching people nothing that’s known for dumbing us down. So I advise y’all to read as much as you can especially in book form. It’s something about opening a book and reading those actual words that convey wisdom more profoundly than scrolling or looking at pictures. That’s just my advice to you all.

This was just the first twelve minutes of the interview. There many other questions Jaguar Voices had asked. Some questions were a little deeper in meaning and were really impactful. To see the full interview, go to our youtube channel and watch the almost hour-long conversation we had with Mr. Tolbert.