GSA Looking to Make a Change to Social Dilemma 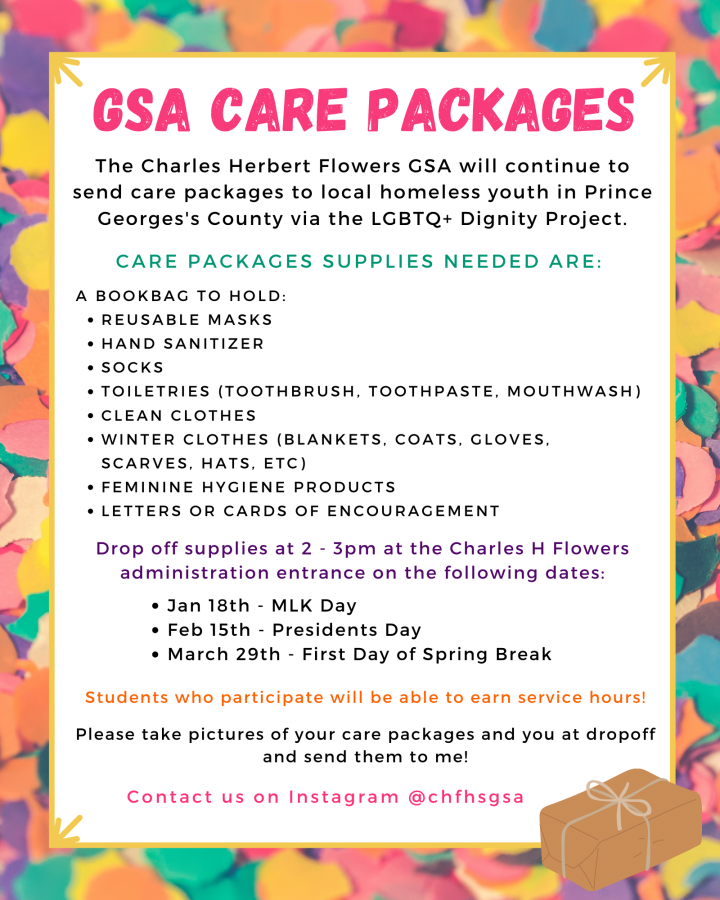 One of the flyers for GSA care packages, which are hosted every few months.

The Rainbow Club is Charles Herbert Flowers’ division of the Gay-Straight Alliance. They meet on Mondays, 3 pm, for planning periods and Wednesdays, 1:10 pm, for execution. It works to create a safe space open to all sexualities, genders, backgrounds, etc. The club allows open dialogue between anyone and works to destigmatize social issues such as HIV.
“This club is discussion-driven,” the public social relations officer, Maryann says. “We talk about whatever you need to… It’s whatever people are comfortable with,”
Conversation and questions are heavily encouraged with the only rule so far being not to bring in any negativity or hate. Even when someone doesn’t understand something, they were clear that there was no shame for ignorance or being unaware. The Rainbow Club also informs and educates you about others and their experiences.
“People don’t really have a safe place,” the club’s treasurer, Sheon said. “You could introduce a club as a safe space and people are still skeptical because of different people! This is a nice, sunshine and rainbow club,”
Next to all the welcoming that the club does, it is also very active in the community.
“GSA is a socialist activist group… We aren’t radical, we’re just looking to make a change,” as Ms. Whitworth, one of the club’s main advisors said.
They organize frequent Care Package drives to gather materials for any youth shelters, especially LGBTQ youth who don’t have these things.
“Whatever needs they have they will let us know and we will gather what it is,” Maulana, the club’s president stated.
These drives are held usually on days when students are off from school. The best donations are the essentials: toothbrushes, jackets, tampons, etc. Any students who participate will be offered service hours.
The club is active on Instagram (@chfhsgsa) and posts weekly LGBTQ icons of the week such as Jonathan McDonald Van Ness and Alcroft. For Black History Month, the icons have been related to black history and feature icons such as Bayard Rustin and Audre Lorde. On Instagram, there is also a promotion for BLM Week of Action, a week (Feb 2nd-5th) that the club spent celebrating blackness and black culture in all shapes, genders, and forms that it comes in.
They have recently started sending out push emails along with a flyer containing a link for anyone who wants to join. If you are interested, look out for that on Mondays and Wednesdays.