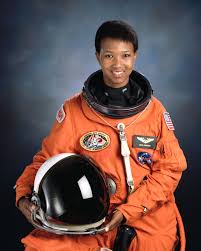 Mae Jemison grew up in Chicago in a time she had to fight for what she wanted even at the age of 10. In  1985, Jemison made a career change from medicine to something she was always dreaming of. In October of 1985, Jemison applied to NASA’s astronaut program.

She also earned the titles of “science mission specialist”. This job requires her to conduct crew-related experiments. In total, Jamison spent 190 hours in space before returning to Earth in September 1992.

Jamison pointed out that society should recognize how much both women and members of minorities could contribute if given the opportunity. Mae Jemison is inspirational because she did the unthinkable and looked at the face of the unstoppable and completed her goal. She did what no other African-American dreamed of and proved “them” wrong. For hundreds of years where we were bound to this earth serving “them”. But Mae refused to stay chained, so she rose and stood up for something. Jemison is still alive to inspire and tell her story.